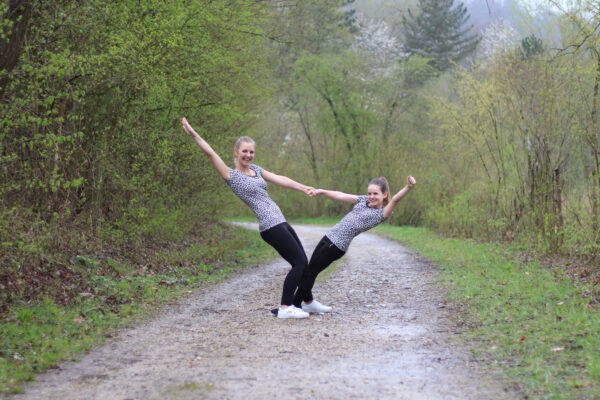 It feels like yesterday she was still my little girl… Okay, she will always stay that in a way. But now my daughter wants to be cool and big. And she would love to have my clothes too. So what does mummy do when she sews herself a new shirt? She simply sews two 😉 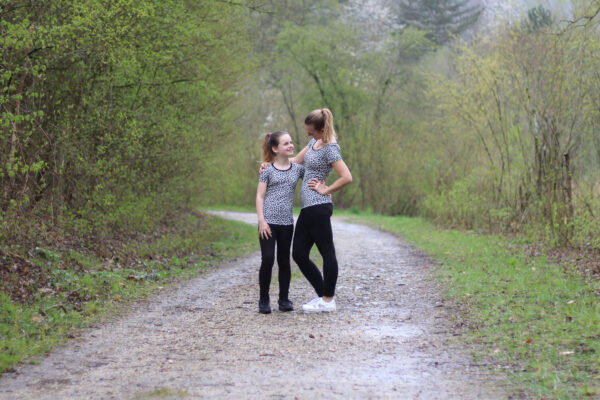 I already knew that I wasn’t the only one in the family who was totally into Leoprint. So when I picked up the fabric, I immediately had the idea to make a partner outfit out of it. So first I sewed my shirt and put it on my daughter. Here and there i had to pin some excess fabric off, luckily she is not as big as me yet. Pattern adapted to her size and shirt number 2 was sewn in a swift. I may consider myself lucky, she looks up to me in many things and I enjoy it very much to be allowed to be her role model. I am fully aware that this is neither a matter of course nor that it will remain so for the next few years. Although, of course, that would be very nice. 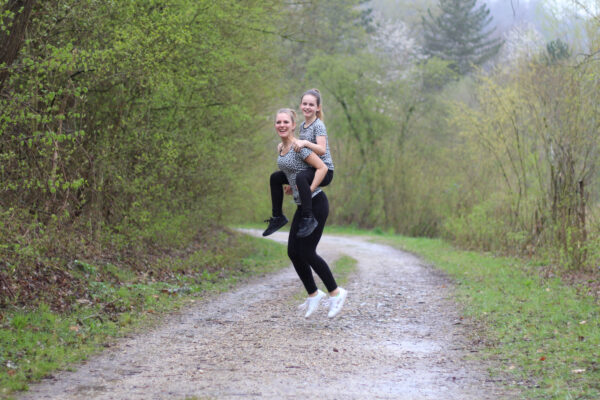 We have grown even closer together since we started homeschooling half a year ago. We have become an unbeatable mother-daughter team. It gives us both an incredible amount of time to spend together. Of course it’s not always easy, even here we fight sometimes. But that simply is part of family life. Nevertheless I may be her support and she – together with my son – my life force. The photoshooting for today’s pictures was also a real family act. All three of us got to use the camera. For the partner photos here I put the camera on a tripod and Junior was allowed to press the button. 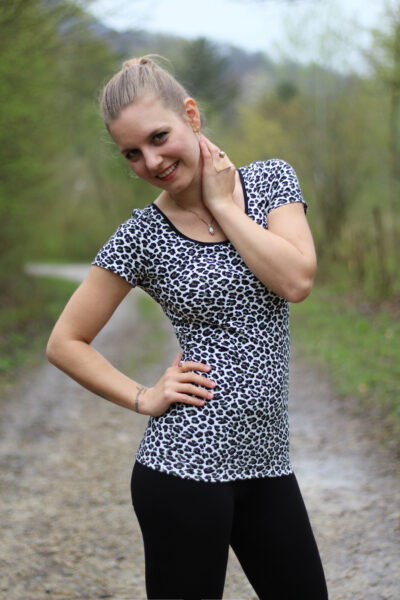 Daughter also took one or two pictures of me to hold my new Slimmy Shirt a little from a little closer up. After all, this is the centerpiece of this post, because it is the current #patternoftheweek and therefore reduced to half the price in the shop. I think this pattern is one of the most sewn in my collection. But it’s also so nice and versatile, from long sleeves to short sleeves, as a shirt or dress and with an additional subdivision for a spaghetti strap shirt/dress, everything can be sewn from it. 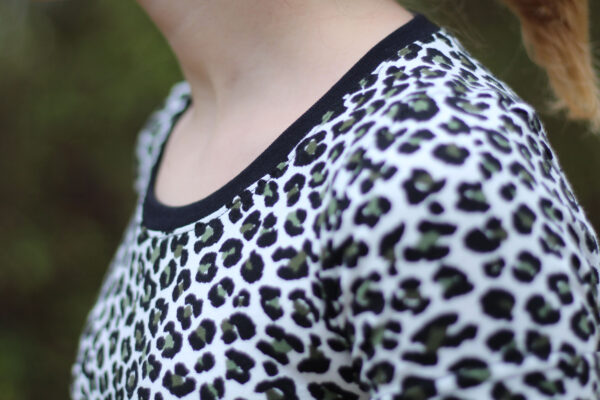 After the first test part here I optimized the pattern again a little bit in the teens size and so there will definitely be some more Slimmy Shirt teens for the daughter this summer. At the moment I’m considering if there would be a need to offer the pattern in a few child sizes. What do you think, would your teenage daughters be interested in this as well? 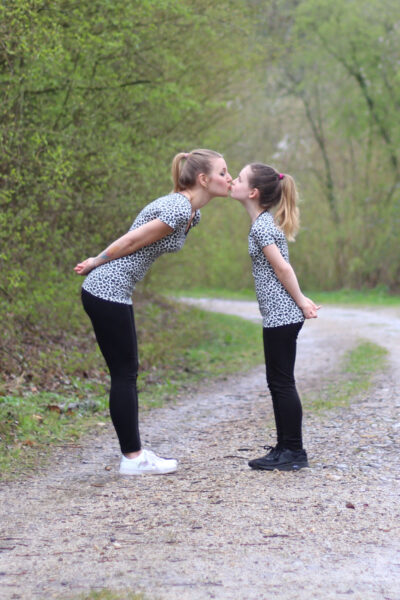 As you can see, love and solidarity are very important to us – I wish you all such a great relationship too. And let your kids like to be sewn for as well. You only need to find the matching material & pattern 😉

Enjoy the soon to be weekend!
Love, Carina
<3 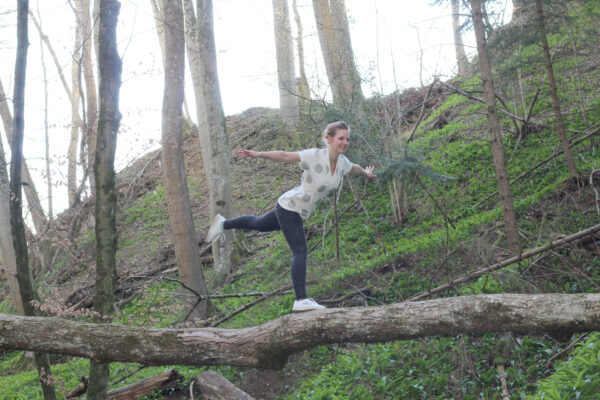 Oh let me tell you – today’s photos demanded a lot from me! But hey, I recently discovered a little piece of paradise and my new Co-Z T-Shirt just had to be photographed in the woods… 😉
I sewed the whole thing out of a linen knit fabric with huge glitter dots which I got from Schnittverhext. 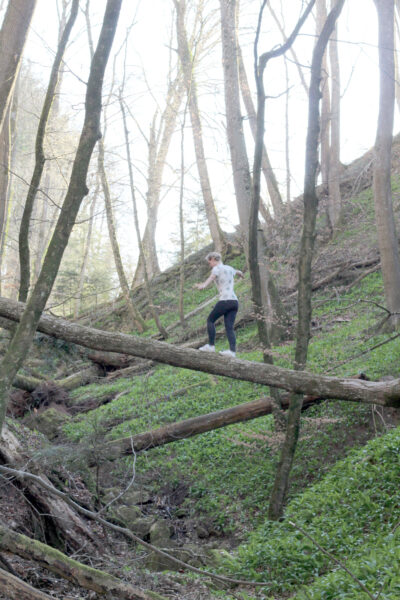 The Co-Z hoodie was exactly that until yesterday – a hoodie. But from now on the pattern contains more sleeve lengths to make it suitable all year round. Just like here with my new short-sleeved shirt. Okay I admit, you don’t see so much of the outfit on the picture, but therefore the 3-4m that goes down under the tree trunk into the very rocky stream bed. It was a bit shaky, but I always liked to climb trees as a child and built bridges over the creek behind the house. So that’s still in my blood. In contrast to dolls and other ‘typical girl stuff’, which I hated as a child. 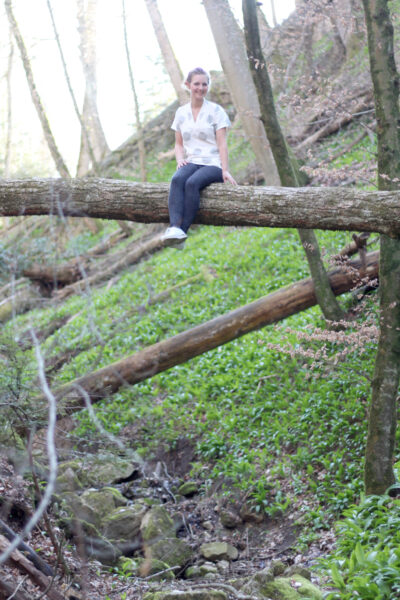 Talking about kids… Mine had much joy behind the camera yesterday and took quite a lot of photos. I think she likes ‘my’ new favourite forest very much. Oh and what else do you see? White shoes. In the forest. In the mud. But hey, they are still white 😉 And it had to be them, because they fit so beautifully to the shirt. I’m not as crazy as to climb up there with high heels. That would be too dangerous even for me. Just like I don’t let my kids up there, at least not as long as there is no safety. 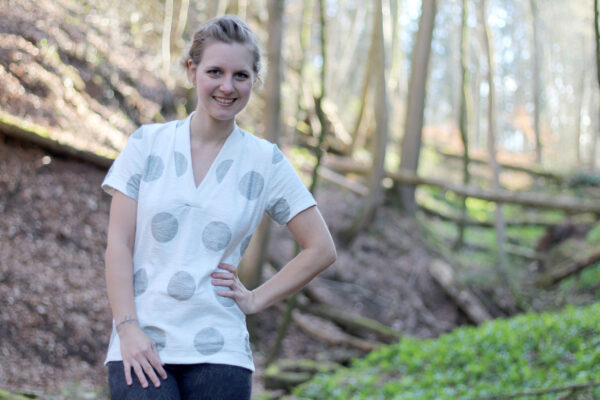 But now back to talking about fashion: The fabric is – as already mentioned above – a linen knit, here it is special that the dots are printed on the left side of the fabric. This lets you turn the fabric around as you like when sewing it together, so that the right side of the fabric is on the outside and the dots only shine through discreetly. I have already seen both variants in different shapes when buying clothes, so it’s a matter of taste here. I think, if the dots already glitter so nice, then one should see them also really well! Because of this, I decided to sew the fabric together with the wrong sides on the outside. 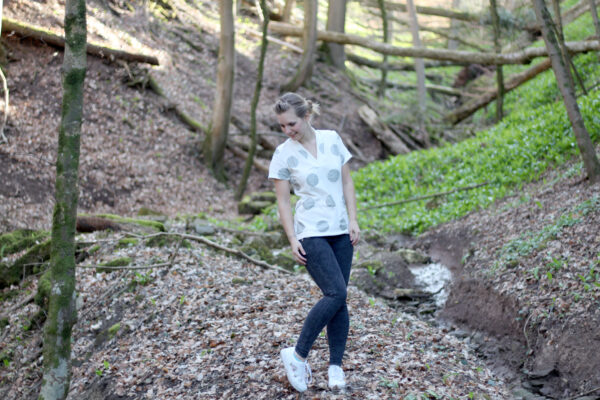 With this shirt I decided for the collar neckline, a hood would give the whole something more sporty, but I was not looking for that. The neckline is sewn with a wide cuff, which is also cut out of the shirt fabric. Even though the Co-Z pattern is not new, I still like the neckline very much, just because it is a bit different. The first time you make it might be a little tricky, but as soon as you get the hang of how and where you have to sew through, you get a great eye-catcher in no time at all.

Because we are literally sinking into bear’s garlic here, I have a picture for you in the middle of one of the many oceans of leaves. And the pattern is available over the weekend at half price, as #PatternoftheWeek. I’m looking forward to breathing a little more life into the design again, as it’s pretty timeless in my eyes and can be done in so many different ways. 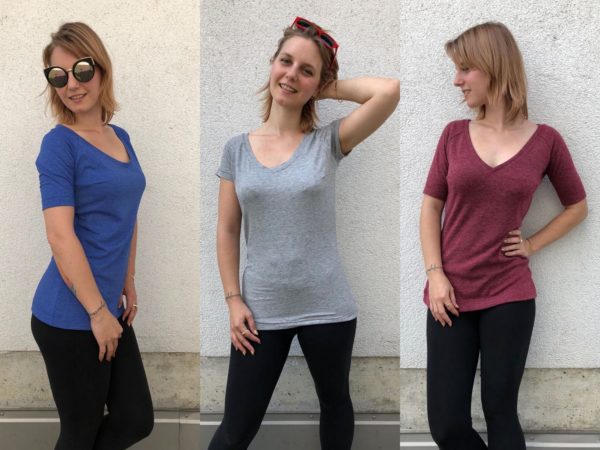 Every few weeks it is time again, I have tons of new ideas and one or the other finds its way to paper and is implemented. In addition to all the rather elaborate pattern, it takes in between fast, simple projects that are sewn in no time. Just like the new Basic pattern, the ‘Simply Raglan’ shirt. 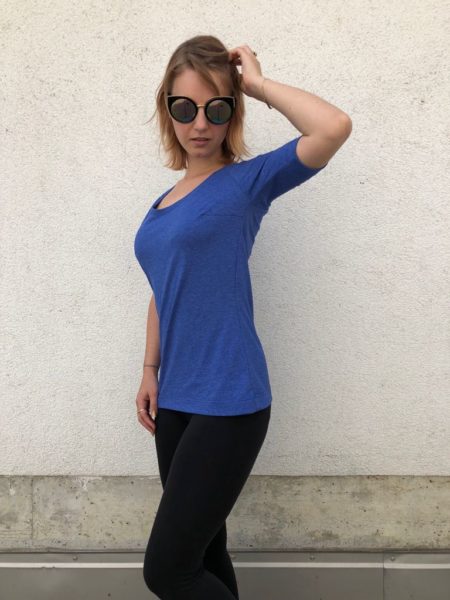 As the name suggests, it is a pattern with raglan sleeves. It is nicely flowing around the figure and therefore suitable for all who usually complain in my designs that are mostly rather slim fitted 😉 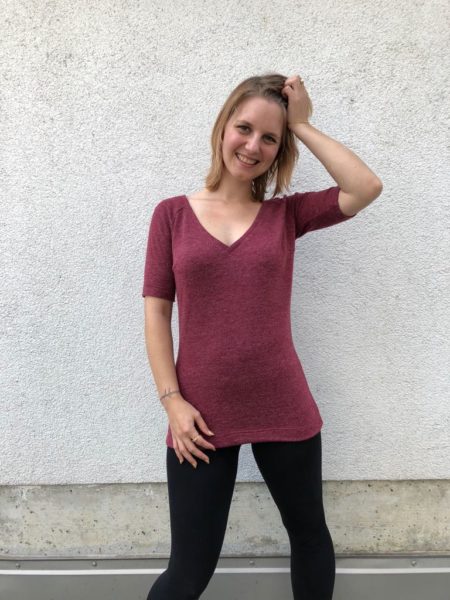 Of course, the patter, even though it is quite basic, still has a few different ways. Apart from breast darts for smaller or larger breasts (yes, the shirt should still make a good figure!), You also have the choice between a V-neck and round neck as well as 4 different sleeve lengths. 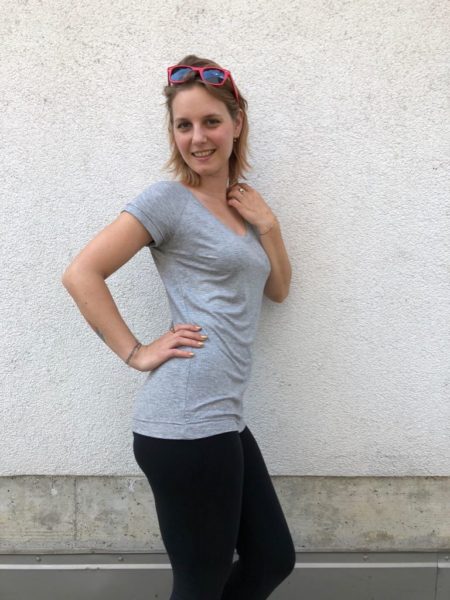 The pattern has already been tested and graded in sizes 32 – 50/2 – 20. To apply, just leave a comment with a link to your page (blog, FB, Insta, etc) and write briefly why I should have YOU right there. Sewn is from the end of the week for about 10 – 12 days.

I am looking forward to seeing you!
Yours, Carina